Crossing the North Atlantic: 1 plane, 3 ships, and a guitarist

Email ThisBlogThis!Share to TwitterShare to FacebookShare to Pinterest
I came to America on a ship. That statement, which is true, can be useful in conversations. For example, when I want to emphasize my age. At that point in the conversation the fact that I came to America from somewhere else is usually apparent from the remnants of my English accent.

However, the truth is that my first visit to America was by car, from Canada, when I was six. And I got to Canada not on a ship but in a plane, one that had propellers on it, just like this: 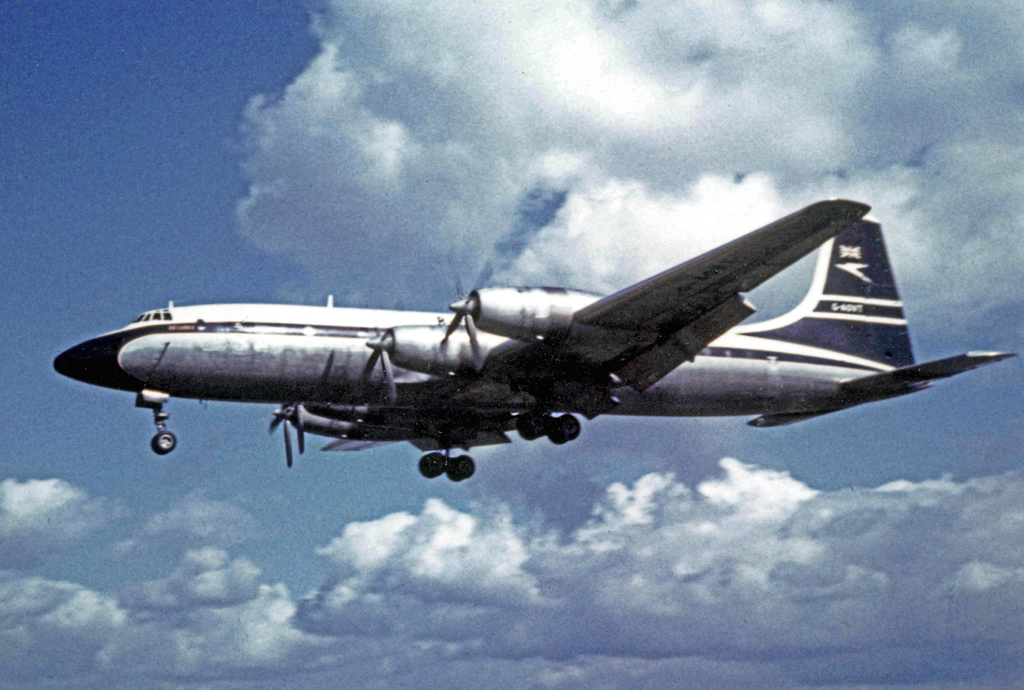 That's a Bristol Britannia, which first flew a few months before I was born. The plane entered service in 1957 and my family flew on one from England to Canada in 1959. The Bristol company has a storied history dating from 1910 until the present. The flight was wonderful. I got to sit with the pilot for a while and received an enameled pair of B.O.A.C. wings.

For about a year my family lived in Renfrew, Ontario. I attended Queen Elizabeth Public School. When we returned from Canada to England a year later, we traveled on the Cunard liner you see below, RMS Saxonia, built in Scotland in 1957: 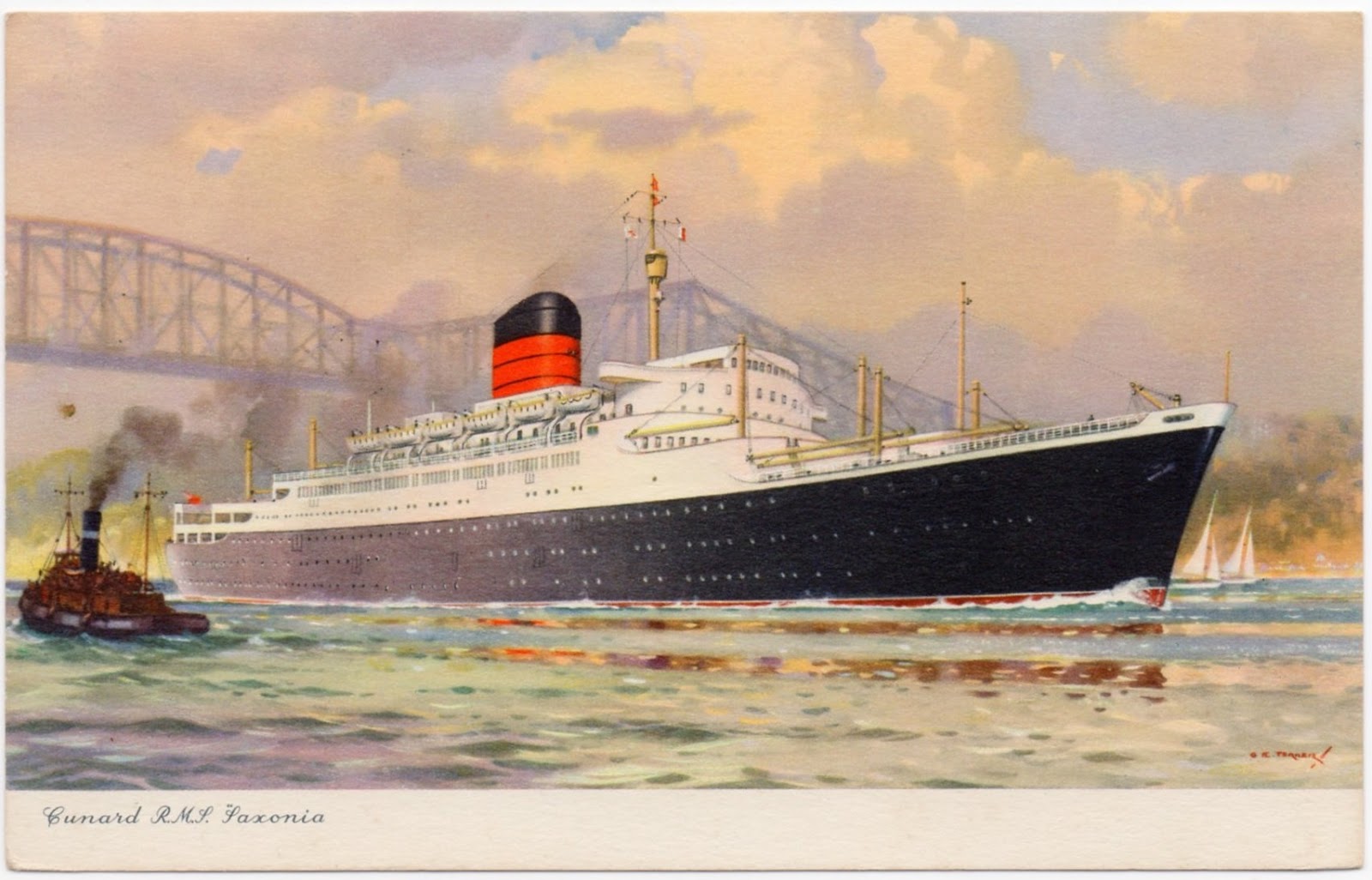 Despite a rough late autumn crossing from Quebec City to Southampton, I thoroughly enjoyed the experience. We were not in first class, but we had an assigned steward at our table in the dining room and he was terrific. For some meals I was the only one at the table (did I mention it was a rough crossing - my mother lost 14 pounds in 5 days). At the end of the trip the steward gave me a certificate he had drawn, stating that I not been seasick the entire trip. Little did I know that the Saxonia would reappear in my life many years later.

Back in England, I attended King Henry VIII School for Boys and then went to university in Leeds where my first year roommate was guitarist Steve Donnelly. During the final year of my Bachelors degree I applied for and received a post-graduate teaching post at McMaster University, in Ontario, Canada. To get there I booked passage on a Russian ocean liner, the MS Mikhail Lermontov: 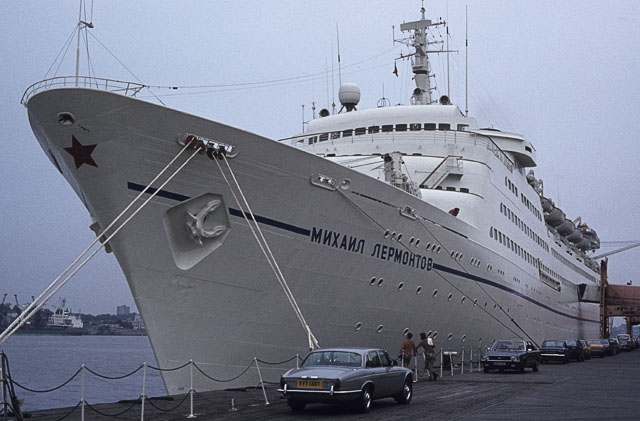 In the mid-1970s the Lermentov was making round trip cruises from New York, via London, to Leningrad (now St. Petersburg) in Russia. Traveling at a leisurely pace, the ship was a floating showcase of Soviet culture, and a way to obtain U.S. dollars from the mainly American passengers who took the round trip.

I have no doubt that my "student" fare of 100 Pounds Sterling for passage from London to New York - cheaper than airfare and a real bargain when you consider it included as much luggage as you wanted - was a ploy to expose young people to the wonders of the Soviet Union. These included some terrific Russian cuisine, Russian dance performances and all sorts of classes (balalaika, borscht, Russian literature and of course, the poetry of Mikhail Lermontov himself).

However, the most memorable cultural experience for me was passing under New York's Verrazano-Narrows Bridge at dawn and sailing past the Statute of Liberty as the sun came up. After that, the trip by Greyhound bus from New York to Hamilton, Ontario, was a bit of an anti-climax.

After graduate school in Canada I went back to England, choosing an ocean passage again, from Montreal to Southampton on a Polish ocean liner, the TS/S Stefan Batory that was originally built in the Netherlands in 1952:

The Polish crew were great and the service was wonderful. In fact, the Batory went on crossing the ocean from Gydnia to Montreal until 1988, the last regularly scheduled transatlantic passenger service.

Note: TS/S stands for Turbine Steam Ship. MS in a ship's name stands for Motor Ship, indicating that it is propelled by an internal combustion engine. These abbreviations are a great source of trivia questions, like what does the RM in RMS stand for? It's not Royal Majesty, but Royal Mail.

Some 29 years after my last transatlantic crossing by ship I met up with my former college roommate whom I had not see in more than 30 years. To cut a long story short, and leave out the many expressions of wonder, it turns out that after Leeds, Steve had played guitar in a house band on the Saxonia! So my roommate had sailed the seas in the 1970s on the same boat that took me from Canada to England as a boy.

And get this, the ship Steve played on was Soviet at the time! It turns out that in August 1973 the Saxonia was bought by the Soviet Union-based Black Sea Shipping Company. She was renamed after Leonid Sobinov, a famous Russian tenor, and put to cruising!

Not only that - and this is where it gets really spooky - as the conversation continued, we realized that Steve had played in another ship band, on another Soviet vessel: the Lermontov! Apparently, she had been upgraded to a Western-style cruising ship in 1982.

A few years ago, I was at a wedding reception in Toronto and late in the evening the bride's father, a gracious host and serious follower of rock music, asked me: "What's the biggest coincidence you've ever experienced?" I had to tell him the one about the two ships and the rock band roommate.

The epilogue is a sad but telling one:  In 1986, in an incident that prefigured the tragic fate of the Costa Concordia, the Lermentov hit rocks while sailing close to shore and sank. That was in New Zealand waters. Steve was not onboard. In fact, all aboard were saved, except for one crew member. She now rests on the ocean floor and is considered one of the world's finest wreck diving experiences.

Let me end this strange tale of ocean travels with Steve on guitar...he's the serious looking one on the right.


You will also find Steve on all Nick Lowe albums since Dig My Mood, and on Suzanne Vega's Nine Objects of Desire plus Sheryl Crow's eponymous album. Fans of Bill Nighy may know Steve from the 1999 movie Still Crazy, for which Steve provided most of the music and guitar solos. More recently Steve appeared on Bonnie Raitt's first studio album in seven years: Slipstream. Finally, check for the iconic Fender coming in at 1:48 in the following, that's Steve Donnelly: